Yup, it was inevitable that a penguin nut like me would do a penguin theme one of these days with my kids yoga class. I taught this theme to a few different classes this week and thought I would share some of my class ideas.

Walk like penguins! Waddle around with webbed feet on your heels and flap your flippers. Or, as one child pointed out to me, penguins have to move their feet mostly together, so you can hop around with feet together or try to walk this way, inching the feet forward.

When penguins are excited to see each other, they flap their flippers and let out a big squawk. Kids can take a deep inhale and exhale out a big squawk when they encounter other penguin friends.

Penguins build nests and when they lay eggs they keep them warm by holding them on their feet so their feathers can warm them. You can practice balancing a small ball on the feet while staying very still in a squatted position.

Penguins sometimes have rocks to waddle around. Several children can be rocks by coming into mouse pose with a little bit of space between each child. Have several others be the penguins and waddle around the rocks. Then switch so penguins become rocks and rocks become penguins.

Have children be the frozen icicles in Antarctica by bringing hands together overhead, interlacing the hands and reaching pointer fingers up. Become a jagged iceberg by leaning from one side to another. Imagine the sun coming out and slowly melting the ice into a puddle while kids slowly lower to a squat, then all the way down on the mat. You can also make a big iceberg with a partner by facing each other with hands together and making an arch like the tip of an iceberg. 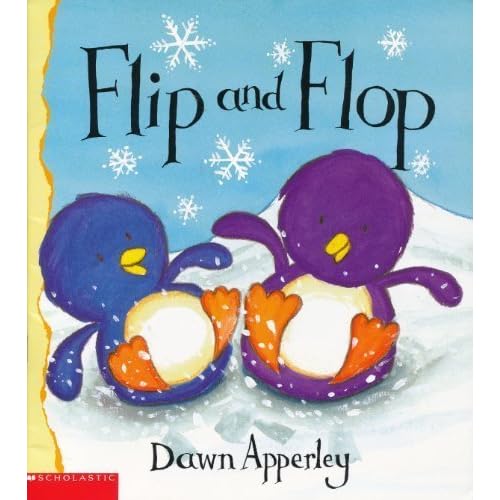 There’s a ton of penguin kids books out there, but the one I used, Flip and Flop by Dawn Apperley, is a great choice. We did a number of penguin activities along with the book.

Just like the Flip and Flop, we played “Boomba” where on the count of three everyone jumped and yelled, “Boomba”, then rolled down like a ball onto the back and then all the way back up. For an added challenge, we tried a “no hands” Boomba.

Another game the penguins play is sliding down the ice. Everyone made a slide (purvottanasana, which looks like a reverse plank pose). I went around with the little penguin in the picture above (who is on the round side) and rolled the penguin down each child’s “slide”.

And of course, penguins go swimming! Stand at the back of the mat to get ready to dive in. Reach flippers up, then slide all the way down through a forward bend and onto the belly. Swim by lifting up and bringing flippers back. Kids will get creative, maybe wiggling forward as they swim or bringing the arms out the side and then bringing them forward and back to steer themselves along. Come out of the water by pressing up into the hands and walking or hopping the feet forward to the front of the mat and stand on land again.

For older kids, you might try the book The Emperor Penguin’s New Clothes by Janet Perlman, which tells the classic story of the emperor’s new clothes only with penguin characters. I haven’t had a chance to try this one out yet on a class, but it strikes me as a good one for exploring the themes of the story and how this relates to yoga (speaking the truth, humility, danger of putting someone up on a pedestal, etc.).